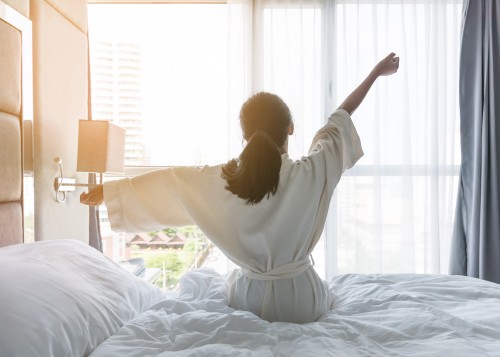 Sleep apnea is a dangerous sleep disorder that affects millions of Americans. Learn its symptoms and options for treatment.

Sleep Apnea is a general term describing a disorder in which a person sporadically stops breathing throughout the night. Episodes of sleep apnea can last from just a few seconds to a few minutes. A patient with sleep apnea can have upwards of 30 events per hour.

These episodes stop you from reaching the deep restorative level of sleep called REM. REM sleep is the stage in which you dream, and it is also when your body relaxes the most allowing itself to heal and replenish.

Some studies suggest that as many as 1 in 50 Americans have undiagnosed sleep apnea. Sleeping partners first recognize most cases because of the characteristic snort or gasp made by the affected individual when normal breathing resumes.

Sleep apnea can affect anyone, including children. Men are diagnosed more than women, but as we age, the likelihood of developing sleep apnea levels out, affecting both sexes equally.

Obstructive sleep apnea is the most common type, where the tissues of the soft palate and throat relax, blocking the airway.

Sometimes, the brain forgets to tell the lungs to breathe. This is called central sleep apnea and results in lapsed breaths. When the brain "remembers" to send the signal, breathing is resumed.

Genetics can play a minor role in whether you will develop sleep apnea. Still, many more controllable factors play a much more significant role in whether you are at risk for developing this disorder. Being overweight and/or having a large neck circumference (over 17" for men and 15" for women) can increase your chances of developing sleep apnea. Smoking, alcohol, and sedative use put you at a higher risk as well. People who have congestive heart failure or a history of stroke are more likely to develop central sleep apnea as they age.

Symptoms of sleep apnea include:

A diagnosis is made after a detailed exam and either an overnight sleep study or a home sleep test. The sleep study, or nocturnal polysomnography, involves going to a sleep center or hospital for several hours or overnight. A polysomnography technician runs special sensors to a cap that you wear while you sleep. These sensors measure heart rate, lung activity, and brain wave patterns. The technician usually monitors the equipment in real-time as you sleep in the next room.

The home test involves a similar setup but is less involved. If the home test results are inconclusive, you may still need to have a test done in a sleep center or hospital.

There is a wide range of treatment methods available for those with sleep apnea. You and your doctor can best decide which will work best for you.

Oral appliances can also be used to treat sleep apnea. They are ideal for people with mild obstructive sleep apnea and for some that find machines cumbersome and uncomfortable.

In the most severe cases, surgery may be recommended to remove excess tissue in the throat and soft palate.

There is no permanent cure for sleep apnea. But there are many treatment methods available to manage symptoms, making it possible for you to get the deep, restorative sleep your body needs.

Taking the Pain Out of Hygiene
Ortho Isn’t Just Child’s Play
Use ‘Em or Lose ‘Em: Don’t Let Your Dental Benefits Go to Waste
Back to Blog